I am currently reading Coaching for Equity: Conversations That Change Practice by Elena Aguilar. Each chapter ends with a series of reflective questions for the reader to consider in our own equity and coaching journey, and I’ve decided to blog some of my reflections. I’d love to hear your thoughts in the comments. My first reflections, from the introduction, are in post #1.

Here are a few of the reflective questions from the end of this chapter, which defined Aguilar’s transformational coaching model.

Which components of Transformational Coaching (TC) do you already practice? Which elements of TC are not a part of the way you coach?

The 3 components are the coach, the client, and the systems.  Throughout my career, I have learned to pay more attention to my own learning and emotions, and the power they play in a coaching relationship. I try to always be mindful of how I am showing up, but this is something I am constantly reflecting on after a bad day.  Having been a coach throughout so many of my roles, I feel confident that I attend to the client and how they are showing up. While I’ve done a lot of reading and work in systems-thinking, this is always an area of growth for me. To coach to transform systems and the individuals within a system is bigger than any one role I’ve had. I’ve never truly been in a place where our focus was to dismantle inequitable systems.

If you’ve ever received coaching, how would you describe it? What domain (behavior, beliefs, or ways of being) did it focus on? Is there a domain that you would have liked the coach to pay more attention to?

I have been mentored by many colleagues and supervisors in my career. As a principal, I had the opportunity to have a coach, dedicated to supporting me and my work as a new school leader.  Looking back, I believe that coaching was focused on behaviors – we spent a lot of time discussing what I was doing, or planning for what I would be doing next.  I wish we had spent time on beliefs and ways of being. As a younger leader, I was struggling because I didn’t know how my mood, attitude, and beliefs were all showing up in front of me, taking up space in new relationships. If I had known that my way of being impacted everyone around me, it would have saved me some bumps and bruises along the learning journey!  I also wish that I had been coached around my own beliefs, so that I could have begun my own anti-racism work years earlier than I did. Looking back, there is so much that I didn’t know and that I wish I had learned earlier in my career. It’s hard to dismantle a system that you don’t even realize is built to perpetuate inequities you’ve never been aware of, due to your own (my own) privilege.

How would you describe the coaching you do?  Which domain do you focus on? What impact could you have on your clients, organization, and students if you coached in all three domains?

Coaching is an element of my role, and I feel that I coach into behaviors and ways of being more than I coach into beliefs.  I think that coaching into beliefs requires trusting relationships, which take time to develop. I think that I enter discussions that involve beliefs very cautiously, because I don’t want to make assumptions too quickly, nor do I want to shut down a person’s willingness to continue a conversation with anything too bold too soon.  I think this is an area I need to be aware of, so I can lean into these coaching conversations more confidently as I continue to learn and grow. I also hope to model how to approach these conversations, as I believe it is  the responsibility of all educators to challenge systems that perpetuate inequities.

How might your experience as a child have been different had your teachers worked in a system that used this model of coaching for equity?

I find this question fascinating!  I grew up in a small community with a population that was about 99% white middle class families. Many of my friends had working parents who had graduated from college, and the assumption was that we would all go to college as well. If my teachers had been coached using this model, I believe I would have been exposed to a lot more of the world (outside of the small bubble of our homogenous community) sooner, and with a different lens on my own upbringing. I also believe that there may have been a deeper discussion about our futures that encompassed more than the four-year college track that was expected of us. 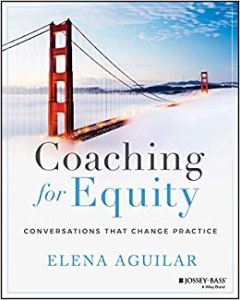 Assistant Superintendent of Educational Services in Southern CA, taking time to reflect on leadership and learning
View all posts by Amy's Reflections →
This entry was posted in Coaching and tagged Aguilar, Amy Illingworth, education, equity, instructional coaching. Bookmark the permalink.

11 Responses to Coaching for Equity Reflections #2