During the month of October I read: 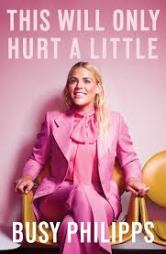 This Will Only Hurt a Little by Busy Philips