I feel that I am at a cross roads with this issue. On the one hand, I want to empower the strong, smart, professionals within our system to feel confident in their choices without having to ask for permission to do what they feel is best for students. On the other hand, I know and understand the value in creating a cohesive system where there are commonalities and structures to ensure the system runs smoothly for all. Where is the balance? Once we have created, defined, articulated, and communicated a shared vision, should members of the system have total freedom within it? Common- common core, common assessments, common vision- are these really different ways to say we all have a commitment to ensuring that ALL of our students achieve high levels of greatness within our system? If we do all share a common vision, does it matter if we take different paths to reach the destination?

The more I think about this concept, the more I hear people asking for permission in a variety of ways.  There seem to be degrees:

I think relationships plan a critical role.  I asked my brother about this concept within his work, something completely outside of and different from education. He shared with me that he doesn’t feel like he has to ask his boss for permission to do anything, because his boss expects him to a) complete his work competently and efficiently and b) communicate directly if there are questions or concerns. What I also heard from my brother was a lot about trust and confidence. He and his boss have developed a relationship with clear, open communication that allows them to trust one another and their day-to-day decisions. His boss knows that he is competent in his role and my brother feels confident in his abilities; he also knows where to go if he needs support.

When I hear teachers ask for permission to do something- whether it is about curriculum, assessment, instruction, collaboration, research, or communication- I wonder about their relationships with their supervisors as well as their colleagues. I also wonder about their confidence in themselves as the instructional leaders of their classrooms. Teachers often hang onto the pendulum of education for dear life, as it swings from one side to the other.  Teachers who work in schools and districts that are part of Program Improvement (a CA system that rates schools based on accountability measures) have gone through a variety of structural changes that often play out in the form of mandates with little room for freedom. They have been told to read directly from their Teacher’s Editions and later have been told they may not open the TE during the day- to teach without it and create their own curriculum. With all of these mixed messages it is no wonder that teachers feel they need to ask for permission to try something new, or to explore a new way of helping their students access content.

The challenge to us all is to help open the lines of communication so that collaboration can support sound instructional discussions instead of people waiting for someone to tell them what to do or waiting to get permission to do what they know is best for students. I would like to hear fewer people asking the question, “Can I do this?” to one supervisor, and more people asking their colleagues, “How can we do this?,” “How can our students do this?,” and “What else can we do together?” 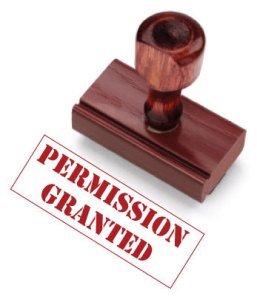 *May 2016: As I reread this blog post, I am struck by how often the issue of permission still comes up in my day-to-day work. It is also worrisome to think that when we have a culture of people needing permission for everything, we do not have a culture of innovation or risk-taking. We are creating systems where our adults are not accessing the skills needed in the 21st Century, which means our students are often not exposed to those same skills. Whose permission do YOU need to make a change? How are you building self-efficacy in the educators and students with whom you work?

3 Responses to Asking for permission